The Mermaid Chronicles: A Mermaid is Born 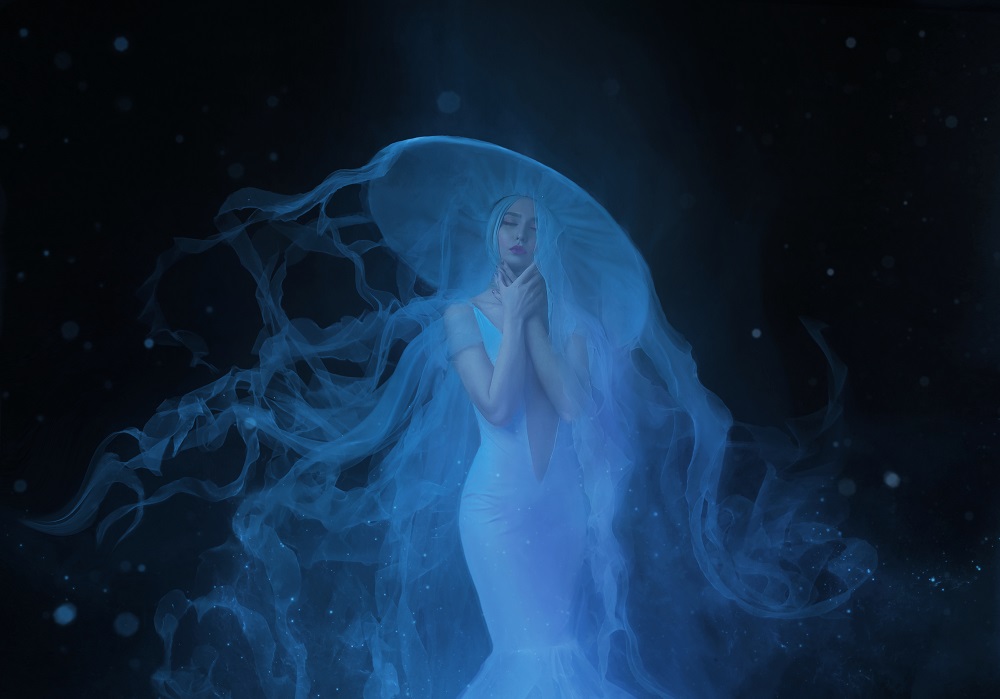 The Mermaid Chronicles: A Mermaid is Born

They say that a sudden tempest raged the day my grandmother Willow was born on Eleuthra Island in the Bahamas. The inhabitants of Gregory Town, descendants of the English Eleutherian Adventurers who sought religious freedom in the mid 1600’s, sensed a communal dread. Across the island, the trumpet sounds of conch shells filled the air as the islanders called to the sea goddess Yemayá for aid. As the mournful bellows filled the air, Willow descended from the womb of Rebecca Pinder. The baby’s devilish eyes sparkled with the glassiness of a fish eye. And then she began to howl, her cries rising with the clash of lightning. Never had anyone cried as Willow did at leaving the womb. Only when the midwife cradled her in a warm bath was she pacified.

Rebecca peered over her distended stomach, weary from the arduous birth, and in a hopeful voice said, “A boy?” Already twenty years old, and saddled with three daughters, she longed to produce a family heir.

“Sorry, ma’am,” the midwife whispered. Afraid she’d been touched by evil, she said nothing more but offered a cup of Hog Plum tea to restore her client’s strength.

Willow grew into diaphanous wisp of a girl. Her skin, the color of the island’s famous pink sands, her eyes so pale it seemed they offered a doorway to the netherworld. Even as a toddler her hair grew long with a greenish cast. Given the comforts of life—food, milk, a lullaby—she would cry. Yet she appeared content, even happy when deprived. Sharp angry sounds moved her to suckle; laughter made her frown. If left-handedness was a sign of evil, surely Willow’s left-handed mind had the makings of a she-devil. Embarrassed by her odd daughter, Rebecca hid her from prying eyes. Nevertheless, word of Willow’s behavior spread throughout the small island.

Each night a group of sea-worshippers left offerings of fresh conch meat or coconut water or at the family’s door for the child whom they called Yemacita, Little Yemayá. She was, they believed, a daughter of the sea. Horrified by such barbarity,

Rebecca begged God to lift this social stigma. How would her three other daughters find
respectable mates? God responded through Willow’s father: the girl must be baptized.
Unwilling to expose her strangeness, Rebecca resisted.

“It is God’s will,” John Pinder said. “Bring all the children to me, Jesus said.

We must believe in His providence.”

On a shining Sunday morning she bundled Willow into the family baptismal clothes and carried her aboard a small ferry boat. As the family sailed across the bay towards Harbor Island, the wind rose up. Dark clouds obscured the sun. The waves bowed their frothy heads as if homage to the special guest. While the boat rocked, Rebecca gripped the side rail and Willow cooed with delight. In the mother’s heart she knew that her unlikely spawn had somehow caused the change in weather. Distraught, she fought a horrible impulse to throw Willow overboard. Little did she know her daughter would have happily swum away.

News had spread, and as the Pinder family tramped through the muddy streets of Dunmore Town, climbing the hill on Church Street towards St. John’s Anglican Church, which was founded by Willow’s ancestors, they passed by a crowd curious for a glimpse of the infamous offspring. Rebecca blushed with shame. Only the devil could have wrought such a pitiful creature.

Inside the austere church phantasmagorical multicolored shadows fell through along the stained glass windows. Willow laughed and giggled with all her might.

Reverend Aulbry competed to be heard over the rolling thunder and damnable distraction of the weird baby. He cut short the sermon and hurried the family to the baptismal font.

As soon as water seeped onto Willow’s eyes, her cries stopped. Rosy sunlight parted the angry skies and lit the storied windows of the church. The parishioners let out a communal gasp.

Mister Pinder whispered in his wife’s ear. “God has blessed her.”

Rebecca hid her doubts. Willow was in God’s hands now.