THE MERMAID CHRONICLES: A Mermaid’s Search For The One 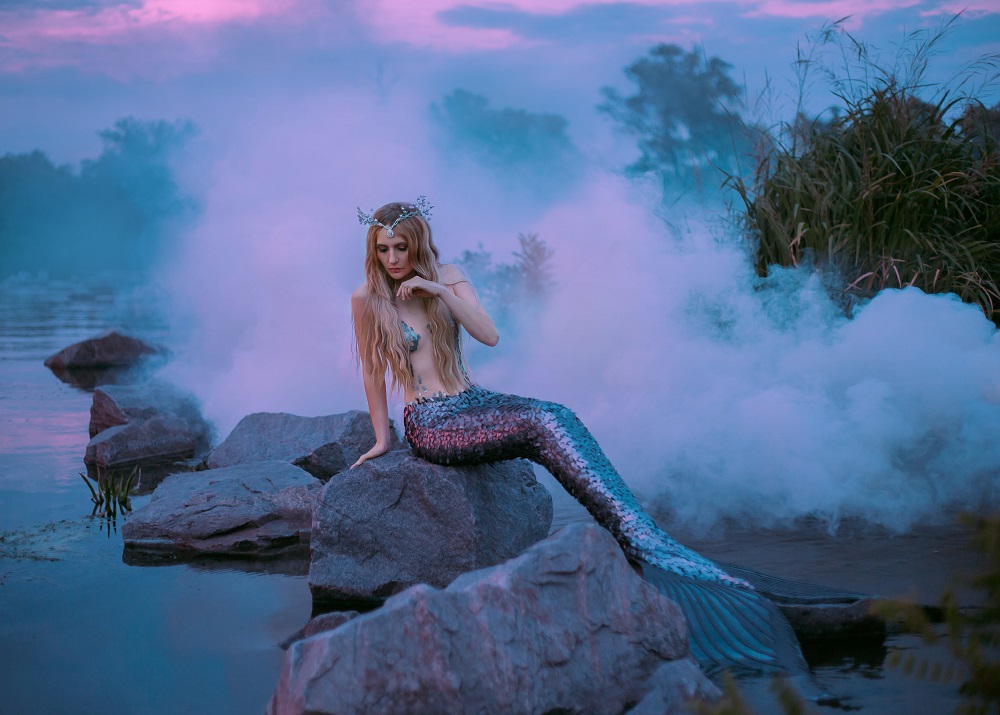 THE MERMAID CHRONICLES: A Mermaid’s Search For The One

Tears of happiness rained down her cheeks.

His apparent fear of the water upset Willow and she laughed. This was not a good sign. She also couldn’t deny that the promised one was a stocky man unlike Thomas. And yet hadn’t her sweet cousin freed her from that awful prison? She must woo him like the animals of the sea. Then she would be certain.

She gave him a playful shove, imitating a porpoise in heat. He might have wondered at her strange behavior but he could think of nothing but the contours of her womanly body, pressed against her wet dress. Willow led him by the hand behind a patch of hibiscus plants and, without a word, unbuttoned his shirt. She ran her hands over his chest and along his arms and back. Where was the sign of the Goddess? Nothing. When she reached for his belt buckle, Thomas came to his senses.

She giggled in disappointment. “It’s not there.”

“What?” he said with a dry tongue.

On attack, she kissed him hard on the mouth. Unable to fight back, Thomas leaned back on the ground, feeling faint. She pulled him close so he could feel the heat of her body. It was working; his sex grew stiff against hers. She unbuckled his trousers. Now he seized her shoulders.

Willow inhaled the vibrant scent of roses, lilies and carnations, which tumbled from his mouth. She laid a soft hand on his bare chest, sending his heart racing.

Overcome, Thomas returned her kisses. “Oh, Willow,” he whispered in her ear. “I loved you the moment I first saw you.”

In a jumble of intertwining arms and legs, they slid to the soft sand. Thomas held his breath as she searched his naked body. Her hand brushed away the dark hair from a moon-shaped mole on his inner thigh. But no, it was shapeless, after all.

Tortured by her touch, Thomas could resist no more. “Don’t worry, I will marry you,” he said, lifting up her skirt. He threw himself on her and with frenzied movements, made love to her. Afterwards, they lay side by side, panting.

He caressed her flushed face. “We’ll always be together, my dear. Nothing can part us now.”

Willow hadn’t minded lying with Thomas. In fact, in the violent motion of sex, she had seen the Sea Goddess riding the waves and heard her speak: The promised one is coming.

He tried to gather her in his arms but she refused his embrace. She stood abruptly, brushed down her clothes, and arranged her hair.

With a nonchalance that broke the young man’s heart, she said in her singsong voice, “You are not the one, Thomas.”

He shot to his feet, stumbling over his pants. “But you said we’re one.”

Poor Thomas was like all the Octopus followers. He didn’t understand he was already loved.

“I am waiting for the one,” she said, matter-of-factly.

Stunned, Tom watched her skip back down the beach. For God’s sake, she was wrong! He was the one. If it took all his time and energy, even his life, he would win his cousin’s love.

As it turned out, the straw market gave Willow the perfect spot from which to continue her search. While working on her Shell Craft, she kept an eye out for the one. Over time, she spotted several possible saviors.

It goes like this: As if by sonar, Willow’s head jerks up whenever a handsome, stocky, dark-haired fellow approaches.

The man may have passed this way hundreds of time, the market blurred into the background. Now, however, the captivating lilt in the girl’s voice rises like a songbird above the commotion and he stops. Struck by her uncommon attraction, he lingers there. Willow hands him an encrusted cross and smiles with a boldness that catches him off guard.

Though he knows this sellers’ trick, he doesn’t hesitate. “How much?”

“For you,” she repeats. If only you are the one!

When he accepts the strange gift, she beckons him towards the harbor. The man looks around, suspecting an ambush. Seeing no one, he follows Willow to the sandy area underneath the docks.

If he were more careful, he might have noticed Thomas hidden in the shadows. Tortured by the possibility of Willow finding the one, he spies on her day and night. Losing sleep and peace of mind, his studies falter and he is no longer a desirable bachelor. Disheveled and bleary-eyed, he watches her and her lucky catch, while muttering, “I am the one.”

Meanwhile, Willow begins her inspection. She kisses the candidate then searches him for a sign of proof. The eager but bewildered prospect can’t resist her charms. Provoked, the man makes violent love to her. Willow now considers this a necessary but pleasant part of the affirmation process. In the throes of passion, she listens for the Sea Goddess’s affirmation.

Crouched behind a piling, the waves running over his shoes, Thomas pulls at his hair and curses his beloved. To his relief, however, he sees Willow turn away from the man with the same disregard she once showed him. At least this fella is not the one, either.

Naturally, the straw workers gossip among themselves about Willow’s behavior.

“What you t’ink she does cut eye at dem men-dem walking by, eh?”

“She guh look for her heartstring.”

Ivy shakes her head. If Willow’s sweethearting be black magic, what Ivy can do? Only a dirty bird does dirty her own nest.