My Love Affair With Sailors’ Valentines 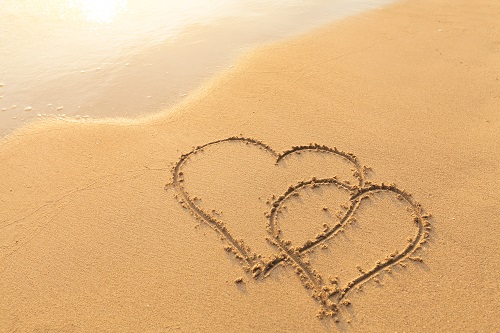 My Love Affair With Sailors’ Valentines

I don’t recall the first time I saw a Sailors’ Valentines, but I do remember the feeling. It was like falling in love. First, let me explain that I love handicrafts. In high school, when time was easy, I often sewed pretty clothes and created hand-built ceramic pots. I come from a long line of women who knitted or tatted or embroidered or sewed beautiful things, many of which I still own. In my guest bathroom hangs a cross-stitch sampler that an Italian relative made in 1899 while crossing to America to meet her husband-to-be. From a Swedish relative, I have a treasured pair of cream color quilts with red embroidery made in the same year as the sampler, one with a likeness of the Fuller steamship.

What I love about these handmade items are the stories they tell. I can imagine a young woman on the deck of a ship with no television to distract her or partying allowed. Her embroidery needle keeps time as she pushes it through the stretched hoop over and over again. She is thinking of the man she will marry, hoping, perhaps, that he will be kind. Her emotions are wedded into each stitch. And yet, you only will know of her story if it has been passed down.

A Sailors’ Valentine bares its heart and draws you into its story with its very composition. It reminds me of the tapestries of old that depicted a story in detailed images. The Valentine tells its stories entirely with shells. However, there is no resemblance to the kitschy shell figurines you find in beach towns along the eastern coast. The artistry of a Sailors’ Valentine is complex and can take hundreds of hours to complete.

If you have never seen a Sailors’ Valentine, picture an octagonal shadow box that holds a shell mosaic. The designs vary greatly, but often include a heart at the center with a short legend: Forget Me Not, Love The Giver, Ever Thine. Often picture and verse complement each other, such as Love Points The Way underneath a detailed compass. Remember, only shells are used, including for the words, which are made of tiny seed shells, and must require enormous patience to fashion. I have, however, seen Sailors’ Valentines that include a photo or a small watercolor within the shell design.

Romantic legend says that sailors crafted these shell works during long voyages, while pining for a loved one. In reality, a cottage industry sprung up in the Caribbean, especially in Barbados, to cater to sailors in port. This was during the height of the Victorian obsession with shells. Imagine a sailor’s pride and delight when he returned home and gifted one of these exotic creations to his mother, sister or wife. And when he returned to the sea, something of his heart was left behind.

Few of us have the time for handicrafts—I can barely find the time to answer all my emails. Yet the samplers and quilts and a Sailors’ Valentine reminds me of the underlying simplicity to life and of some things that matter most: love, connection, and sharing our stories.