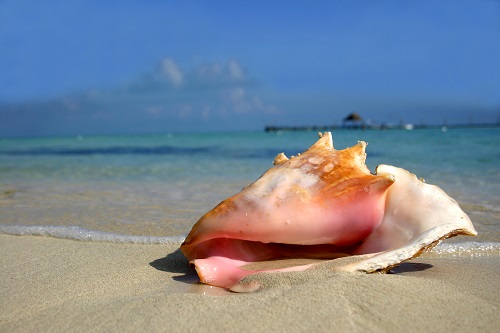 The Queen conch is the name of a popular, mythical seashell and the large marine mollusk that it houses. It is also called a Pink conch due to its beautiful rosy hue. The term “conch” and “true conch” refers to a variety of medium to large-sized shells that house marine gastropod mollusks from the Strombidae family. In many popular myths, it is believed that you can hear sounds of the ocean if you hold an empty conch shell to your ear. While this makes the Queen conch shell the perfect inclusion for a magical realism book, the “sound of the ocean” is really just noises from the surroundings resonating within the shell cavity. Empty conch shells have, however, been used for centuries as signaling devices in the Florida Keys, due to the epic sound they produce when blown into.

The Queen conch is native to the tropical northwestern Atlantic and Caribbean seas. It is a large mollusk, typically ranging from six to nine inches, though some grow up to a foot. Queen conches are herbivorous creatures that live on seagrass beds in shallow warm waters, where they can feed off plants and algae. They can live for up to 40 years, often continuing to slowly grow—and as the mollusk grows, so does its shell.

The mollusk inside the Queen conch is a soft-bodied, edible sea snail belonging to the same family as clams, oysters, squid and octopus. It evolves into a spiral shape with long eye stalks with a mouth that retreats into the shell in the presence of a threat. The Queen conch’s conical shape and unique pink and orange coloring make for beautiful jewelry, decor and souvenirs that are very popular among tourists.

The Queen conch was once ubiquitous in the Florida Keys but the species is now commercially threatened in many areas. This is due to habitat degradation and overfishing, which their slow growth makes them particularly susceptible to. While the Queen conch is not technically endangered, they are listed in Appendix II of the Convention on International Trade in Endangered Species of Wild Fauna and Flora.

Conch shells play an important cultural role in the Florida Keys, including Sanibel island, where Valentine to Faith is set. Natives to the islands are called “Conchs,” which is how Angel, the protagonist of the novel, identifies herself. Visit this link to learn more about this amazing magical realism book and the homage paid to Queen conch.