The Mermaid Chronicles: A Mermaid Condemned 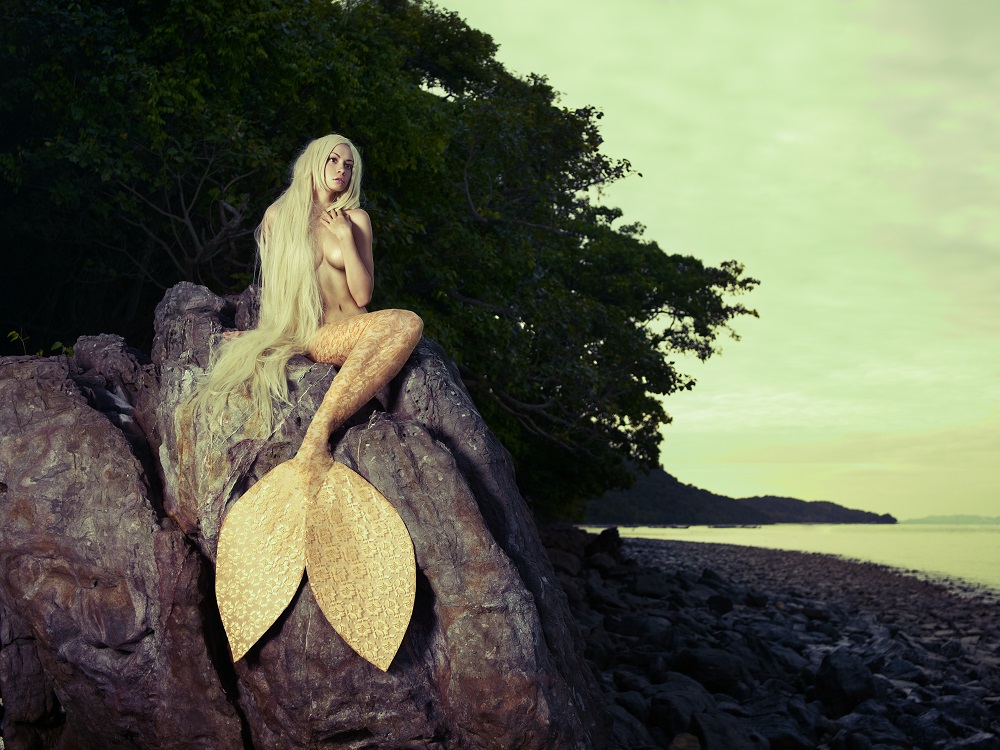 The Mermaid Chronicles: A Mermaid Condemned

By the time Willow reached puberty, her mother decided to check on her spiritual growth. As her family walked home one Sunday afternoon, Willow followed behind, her slender figure swaying on her spindly legs, the greenish tint in her hair glittering in the sun.

Rebecca retreated to her side and in a straightforward manner said, “Do you love the Lord God, Willow?”

Willow shook with such vehemence that Rebecca reached for her and stumbled over the rocks. Her husband rushed to her side.

“Are you all right?” he said, throwing a warning glance at his daughter. He didn’t trust the devilish girl.

Willow looked past her parents, out to the sea, as she struggled to speak. “The father is a bad man, he does not love his children.”

John Pinder, thinking she had cursed him, became incensed. “What’s that you said?” He caught Willow by the arm. “I shall teach you to respect your father!” He dragged her through the street with the terrified girl laughing all the way.

Powerless to stem the specter of shame, Rebecca once more resigned herself and her ill-conceived child to the will of God.

Rebecca had no choice but to change tack. One afternoon she led her to the attic, away from prying eyes.

“Willow, dear,” she said, speaking slowly to accommodate her daughter’s poor understanding, “The time has come for you to know the Lord Jesus Christ as your personal savior. Don’t worry, I will help you in your soul’s endeavor.” If she had only known her words exploded in Willow’s mind like firecrackers on a dark summer night. She began to read from the St. James Bible: “The Lord God spoke through the apostle John, in chapter 3, verse 16: ‘For God so loved the world that he sent his only son to die that we might have everlasting life.’” She pointed at a framed picture of Jesus Christ hung on the cross.

But as Rebecca talked of the Great Octopus, Willow perceived clouds of dark gray oozing from her mother’s mouth. Beads of sweat slid down her chest; her eyes darted round the room as she searched for an escape route. Fearing disaster, Rebecca attempted to lighten the mood by singing a hymn. “Pay attention to the words, Willow.” Her strident tones fell on Willow’s ears like heavy monolithic pillars. To withstand the onslaught, she rolled into a ball like a crab pulling its house over its head. The world around her grew diffuse; her mother’s voice melted away. She stared at Jesus’ sad picture. Poor unhappy Octopus had nothing but a plain cross, not even a broken piece of shell.

The tortuous lessons continued for several weeks until Willow understood she, in turn, must show her people how to worship the Great Mother. In Preacher’s Cave, upon the very stone where her shipwrecked ancestors had worshipped God, Willow and Fearless built an altar to the Sea Goddess constructed with Queen Conch shells. Upon it, they placed many symbols of worship: fragile white domed sea urchin shells, a four inch shark’s tooth, five tiny “teeth” from a sand dollar, which resemble doves in flight. In the middle, upon a bed of dried seaweed, Willow placed a doll stolen from one of her sisters and bound its legs to resemble a mermaid’s tail.

From two small pieces of driftwood she constructed a cross and nailed to it the skull bone of a gafftopsail catfish, which is said to resemble Christ on the Cross. With artistic flair she affixed small shells and old Spanish galleon coins. At last, satisfied with her work, she presented it to Fearless who held it in her hands with awe.

“We must worship proper,” Willow told her.

She waded into shallow waters and, using the tip of a hollow conch shell, pierced a living one. Like a popped cork, the vacuum created by the mollusk’s plate-like operculum broke. With a small knife, Willow extracted the snail and marinated it in lime juice inside a coconut bowl.

She handed Fearless a piece of the sacrificial conch meat. “This is the body of the Sea Goddess, Yemayá,” she said.

Then they split coconut shells against the sharp spires of volcanic rock and drank the milk inside.

“This is the blood of the Great Lady.”

Lastly, as the sun slipped into the Great Mother’s bosom, Willow held the fantastical cross to her breast and sang hymns to the Great Lady. Perched on the cliffs, the spray of the waves making music in her body, she sang with an unearthly high-pitched trill. Her voice lifted into the air and soared across the water. To those who heard, it was an irresistible sound, like an itch that must be scratched.

The eerie sounds mesmerized Grivey, a local fisherman at sea. Surely, his deceased wife was calling to him from the heavens. Come to me, my dear. He turned his tiller away from the safety of deep water and, like a firefly to the light, headed straight toward the cliffs. Enraptured, he paid no heed to the narrowing draft of the boat and, when it crashed onto the rocks, he died with a blissful smile.

Oblivious, Willow simply regarded the dead fisherman as a large beached fish. Fearless ran in horror. Soon, a stampede of villagers came upon the shore where they discovered the crazy girl’s blasphemous temple and, in a riot, destroyed it.

Locked away in the magistrate’s office, Willow clutched her beautiful cross and dreamed she was riding the waves once more. For two weeks she was kept prisoner. Her skin itched, her eyes burned; she turned a deathly gray. She rent her dirty white dress. No one visited but Fearless who brought bottles of seawater, which Willow soaked into her skin.

The Eleutherian’s deep hatred of Willow now came unbridled. They shunned the Pinder family; the other daughters’ suitors abandoned them. When the magistrate’s gavel pounded the desk, it was decided: Willow must go to the crazy bin in Nassau Town.

Bewildered, Willow went home to ready herself for the journey. With a heavy heart Rebecca climbed to the attic for one last attempt to save her child. Willow sat by the window staring at the sea while Fearless packed her things.

“Willow, dear,” Rebecca said, in the softest tone she could muster. “Who is our savior?”

She slapped Willow hard across the cheek. “God is my Father, say it!”

With limpid eyes, she gave her mother a pitiful look and exposed her tanned legs. “See my tail,” she said.

“Lord have mercy on us. You shall leave on the morning boat to New Providence Island.”

Leave? “When will I return?”

“Only God knows.” Though Rebecca had no hope for Willow’s marriage prospects, perhaps the Almighty had other plans. “I suppose if you should marry.”

Mate? Like the fishes of the sea? Willow had never considered the idea. What man would save her from this horrible fate?

The next morning Rebecca presented her with a Sailor’s Valentine, which her father had brought for her mother from the island of Barbados. The message inscribed with shells read: Forget Me Not.

She threw her arms around her daughter. “I pray you will remember me well,” she said, between wrenching sobs, which suffocated Willow like clouds of purple dragonflies. She swatted away the bugs and ran out.

Rebecca screamed at Fearless. “Get her on that boat or you’ll pay for her sins!”

Willow escaped to her seaside hideaway and, falling to her knees in the surf, prayed to the Sea Goddess. Save me!

Hurriedly, she placed a hibiscus flower inside half a coconut shell and set it at the water’s edge. If the Ocean Mother accepted her offering, Willow’s prayer would be answered. If not, Willow would swim into the deep blue forever. A great wave crashed upon the packed sand and rolled back like the tongue of a dragon. Willow cried out as the sea took the shell into its bosom. And in the glittering spray, came a vision: A dark, handsome stocky savior who bore the sign of the Sea Goddess.