The History of Sailors’ Valentines 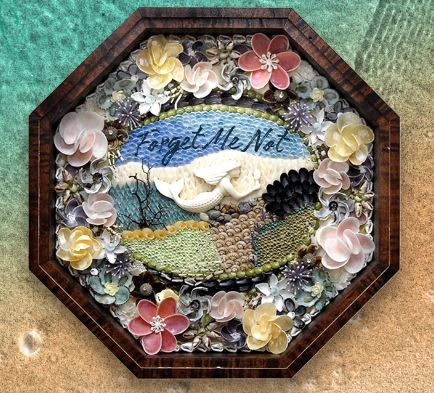 The History of Sailors’ Valentines

Sailors’ Valentines are magical. Their story of origin evokes images of lonely—sometimes lovestruck—sailors passing the hours during long sea voyages by creating these gifts for their loved ones. These painstakingly handcrafted pieces made the perfect gift for sailors’ loved ones when they returned from their journeys.

Sailors’ Valentines are a form of shell art that gained popularity during the late 18th and early 19th centuries. Sailors typically brought them home to the women in their lives as tokens of affection after months or years at sea. Sailors’ Valentines are made with seashells formed into intricate mosaic deigns and glued onto a cotton backing. They are then framed in octagonal cases of glass or wood, often resembling a compass, and covered with glass to protect and preserve the shell work.

The center of the designs often features hearts, flowers, compass roses and anchors. The antiques are usually adorned with a sentimental message spelled out in tiny shells, such as “Forget Me Not,” “Adore,” “Love and Be Loved” and “Home Again.”

While the sizes of Sailors’ Valentines vary, artists use a dozen or more different types of shells—and hundreds of each—to make these brilliant mosaics. They spend hundreds of hours creating the intricate designs in what seems like incredibly meditative, relaxing work. It was originally believed that sailors made these beautiful creations themselves until a 1962 article in the magazine, Antiques, written by Judith Coolidge Hughes, dispelled this romantic myth.

Hughes learned of an early 1800s clipping from the newspaper, The Barbadian, advertising shell work for sale at a store in Barbados, a common port of call for American and British sailors. Further research shows that, originally, local island women crafted these beautiful shell mosaics for sailors to purchase as mementos and souvenirs. This makes perfect sense since most antique Sailor’s Valentines feature similar designs made from shells that originate in the West Indies.

As with all brilliant product designs, a booming business soon evolved. Two brothers from the U.K, George and B.H. Belgrave, founded the New Curiosity Shop in Barbados where they sold Belgrave Brothers’ creations, including Sailors’ Valentines and souvenirs.

Traditional Sailors’ Valentines are now considered antique collectibles, revered for their beauty and uniqueness. There is currently a resurgence of this beautiful tradition, with shell kits in demand and contemporary artists putting their own twists on this age-old tradition. Shell craft and Sailors’ Valentines are once again very popular on the east coast, from Cape Cod and Nantucket to the West Indies and Sanibel island, where Valentine to Faith is set.